InstallMate 9 is an extensively rewritten and updated successor to InstallMate 7, which in turn was a development of the earlier ExpertInstall 3 and Installer 5 products. The most important changes in InstallMate 9 compared to its predecessors are:

Note: Detailed per-release information can be found in the InstallMate 9 Release notes.

After a decade of Windows XP-inspired styling, we have overhauled the InstallMate Builder user interface to give it a more contemporary look and feel:

Furthermore, the general layout is now oriented towards wide screen (16:9) displays instead of the traditional (4:3) screen aspect ratio by reducing the vertical size of the user interface elements and emphasizing a left-to-right visual flow:

Product options and components were first introduced in Tarma ExpertInstall 3 for compatibility with MSI (as Features and Components). They were subsequently modified somewhat in Tarma Installer 5 and renamed to Product Options and Components in InstallMate 7.

However, the two-level option + component structure proved to be overly complicated for most common scenarios, so we finally decided to get rid of the distinction between product options on the one hand and components on the other.

InstallMate 9 introduces new-style components, which combine the functionality of the previous product options with components. This removes the need to introduce an extra level of components just to make the distinction between user-selectable options and the internal component packaging.

The following screen shots compare the previous InstallMate 7 product options + components with the new InstallMate 9 components. Note that the number of levels has been reduced if an old-style product option only contained a single component, and that the whole structure is clearer and more closely resembles what the user will see in the OptionTree control during installation.

In addition to the general user interface redesign, we have made dozens of usability and internal improvements throughout InstallMate Builder. Here are a few examples:

Since Tarma ExpertInstall 3, the internal project file format used XML because it is text based (easy to store in source code management systems, easy to compare different versions of a project with a diff-style tool, and manually editable). However, XML markup tends to obscure the underlying content and is also fairly verbose.

InstallMate 9 uses a new text-based markup syntax that is just as expressive as XML, but less cluttered, less verbose, and easier to read and edit as plain text. We call this new markup syntax QML (for rather obscure historical reasons).

QML resembles C-like language syntax (and C++, C#, Java, JavaScript) and uses the same {...} notation for nested blocks and "\n" style text strings and escape characters as those languages do, plus /*...*/ and //... style comments. However, it is important to note that it is not identical to C or JavaScript or even JSON. QML uses different conventions than those languages when it comes to attribute=value notation, and also in some other areas.

When opening a project from a previous Tarma product, its contents are automatically converted to the InstallMate 9 structure and conventions. The original project is not modified; when you save a converted project, it is stored in a new InstallMate 9 project file. 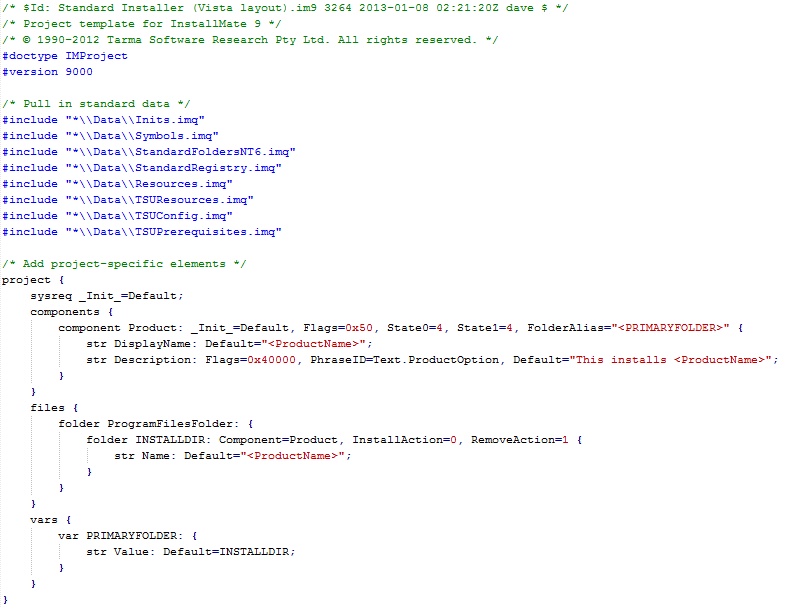 Features that were removed

Based on Microsoft Windows' and market developments and technical support feedback, we have removed some features from InstallMate 9 as well:

Easy to use, fast, flexible, and compact software installers.